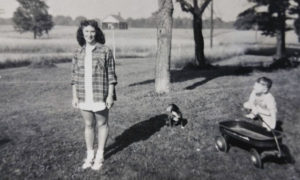 Red Schoolhouse? You may wonder how a “Red Schoolhouse” might be associated with Bender Tree. I learned shortly after purchasing the land on Rt. 193 and Sheffield Rd. (1987) there was once a one room schoolhouse located on the property. That spiked my interest. Soon I was looking for any information the neighbors could give me. A few of the senior members of the neighborhood knew of it. They shared what they could. I was given a photo of Pat  (Nicka) Maki (shown here) with a the schoolhouse over her shoulder in the background, and a testimony from her mother who actually attended the school. She said the school was removed in 1936 and the lumber recycled to build a house at Fox Farm. I also discovered a buried foundation when digging a trench for an electrical line. A large apple tree had grown next to what appeared to be a remnant of a concrete entrance. For many years that was about all I knew.

On a recent visit to the Annual Antique Engine Club Festival in Windsor, I paid a visit to the historical schoolhouse on the property and questioned the lady who was working there. I asked what she knew about the Sheffield schoolhouse. She pointed out a book on the table. It was written by Barbara J. Hamilton of Lenox Township. The title was Where Have All the Shoolhouses Gone? The book is an accounting of Ashtabula County Schools from the 1800s and 1900s. In the book there is a section specific to Sheffield Township. It stated there were 5 or more schoolhouses in Sheffield. It stated that in 1829 a school named “Red Schoolhouse” was built on the northwest corner of Sheffield Center. There it was… an official accounting of its existence. The book stated that the building was also used for community events, elections, and church services. Some of the teachers were: Eliphalet Gage, Harriet Woodbury, Lake Guernsey, Samuel C. Johnson, and Asal Aldridge. The Sheffield Township school system stayed in operation until 1937 when it was divided and pupils were transferred to Jefferson, Buckeye and Conneaut schools.

For approximately 107 years from 1829 to 1936 there was a building called “Red Schoolhouse” in Sheffield Center on the northwest corner of Sheffield Road where Bender Tree is now located. The schoolhouse was also used for elections, community events including sports, and church services. Thanks to Barbara J. Hamilton and her book Where Have all the Schoolhouses Gone? There is a bit more we know about the history of the one room schoolhouse called “Red Schoolhouse”.